Identity in the Information Society (1)

Very late, but better than never - Some notes from a workshop I attended earlier in the year.

2nd Multidisciplinary workshop on Identity in the Information Society, London School of Economics, 05/06/09

· Contact lenses don’t matter – you can wear them or not (contact wearers about 20x likely to be false non-match e.g. don’t recognise you as you)

· Templates don’t age – you can have one enrolment for life (enrolment becomes much les accurate the longer enrolled, with a measurable increase in non-match frequency)

· It’s not a problem when you upgrade your sensors

Posted by David Barnard-Wills at 14:06 No comments:

I have been invited (and accepted) to give a talk at a workshop being held at Royal Holloway, University of London on the 15th of September. The workshop is the conclusion of the two year, ESRC funded study of radicalisation and the media and should be rather interesting.
I'll be talking about terrorism and its role in driving surveillance, primarily drawing upon issues of identity and identification. This will include identity cards, but also identification in the banking and financial sector, linked to anti-terrorist financing measures.
The threat of terrorism was one of the early stated reasons for the introduction of the identity card, this has largely been dropped, but not entirely. The focus is now more upon ‘terrorist use' of multiple identities, and blurring the lines between terrorism and organised crime. This comes out of my discourse analysis research, which studied government publications as well as news media accounts of surveillance – identifying particular frames through which surveillance technologies and practices are portrayed. The figure of the terrorist looms large in these frames.
Posted by David Barnard-Wills at 18:14 No comments: 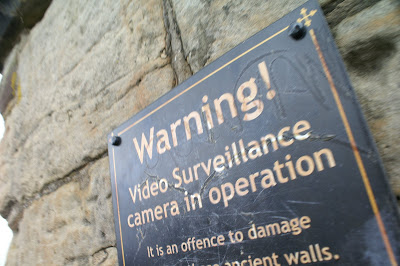 At the top of a tower at warwick castle. Technically it's always been defensive, surveillant piece of architecture. You get rather good views over the surrounding county.
Posted by David Barnard-Wills at 13:19 No comments: 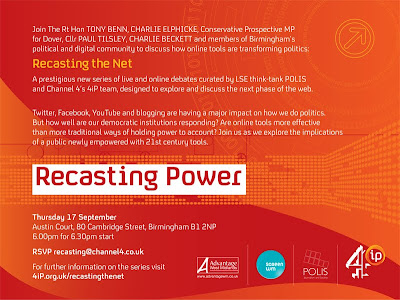 I've just been invited to the above. A debate organised by Channel 4 about how the internet and various other digital things have, and are, influencing politics and the distribution of political power. It's taking place in Birmingham on the 17th of September. September's filling up with interesting activities, including a talk in London about David Lyon's new book, an identities conference in Oxford, a workshop of security studies at POLSIS and possibly a workshop on radicalisation at Royal Holloway.
Posted by David Barnard-Wills at 19:20 No comments:

The US air force held an activation ceremony in Texas yesterday for its new cyberspace combat unit, the 24th Air Force, which will "provide combat-ready forces trained and equipped to conduct sustained cyber operations".

The 24th will be commanded by former Minuteman missile and satellite-jamming specialist Major-General Richard Webber. Under his command are two cyber "wings", the 688th Information Operations Wing and the 67th Network Warfare Wing, plus combat communications units.

Ces Moore and I have been writing a bit about cyber-warfare of late, and I'll be doing more of it to cover the securing virtual spaces theme of the Space and Culture special issue. I don't actually like the term 'cyber-warfare' as it sounds like something Tom Clancy made up.

We had a look at Russian information operations and network warfare in relation to their operations in Chechnya for a contribution to a forthcoming book edited by Asaf Siniver here at UoB. It's a tricky field to get a handle on, given a lot of it is fairly arcane and deliberately hidden. That said, there are some contributions to political science and IR (especially security studies) that can be drawn out of it. In that article, we basically wanted to highlight the use of information warfare techniques as part of a counter-insurgency campaign against groups that were themselves fairly technically literate, and the combination of information attacks with physical attacks of the traditional lethal type.
Posted by David Barnard-Wills at 15:40 No comments:

(I can't make this, but it is free to attend. Contact Kim McCartney
Posted by David Barnard-Wills at 12:33 No comments:

Lessons from the Identity Trail

A fantastic little discovery this morning - I found that the book 'Lessons from the Identity Trail: anonymity, privacy and Identity in a networked society' is downloadable, chapter by chapter under the creative commons license.

Alternatively, you could buy the tome. This is a pretty substantial research project.

During the past decade, rapid developments in information and communications technology have transformed key social, commercial, and political realities. Within that same time period, working at something less than Internet speed, much of the academic and policy debate arising from these new and emerging technologies has been fragmented. There have been few examples of interdisciplinary dialogue about the importance and impact of anonymity and privacy in a networked society. Lessons from the Identity Trail: Anonymity, Privacy and Identity in a Networked Society fills that gap, and examines key questions about anonymity, privacy, and identity in an environment that increasingly automates the collection of personal information and relies upon surveillance to promote private and public sector goals.

This book has been informed by the results of a multi-million dollar research project that has brought together a distinguished array of philosophers, ethicists, feminists, cognitive scientists, lawyers, cryptographers, engineers, policy analysts, government policy makers, and privacy experts. Working collaboratively over a four-year period and participating in an iterative process designed to maximize the potential for interdisciplinary discussion and feedback through a series of workshops and peer review, the authors have integrated crucial public policy themes with the most recent research outcomes.

Posted by David Barnard-Wills at 12:11 No comments: