The coalition comitments between the Conservative and Liberal democrat parties have just been published: here - This idea of a Great Repeal bill has cropped up a few times this morning. There are some hopes for it to be the first wiki-bill. It would put a hell of a lot of things in a single bill, and not all of it is civil liberties inspired - on that page there's a lot of 'this burdens business' too.

"The parties agree to implement a full programme of measures to reverse the substantial erosion of civil liberties under the Labour Government and roll back state intrusion.

checklist?
Posted by David Barnard-Wills at 15:17 No comments:

Here's an interesting article in the New York Times about a Chinese trend of groups of internet users conducting a distributed form of investigative surveillance to focus upon suspected wrong-doers, find out information about them, and conduct vigilantte campaigns to get them fired from jobs etc.

There's a court case in progress about it relating to the suicide of the wife of a 'human-flesh search' target. Story about that here.

This isn't entirely new, and not isolated to China, although it's been given a name now (although one that sounds very creepy and body-horror to my ears). web-fora such as 4Chan or something awful have demonstrated quite substantial capability in this respect. What would occasionally happen was that commentators making use of the supposed anonymity of the web to make comments that in some way angered a critical mass of forum participants, would find that any online detail was being worked out - traced back along a pathway from their online username and comments they had previously made. Often this involved finding any potentially embarrassing material and firing it back at them in the forums, either to counter claims made (about identity or expertise e.g. 'I'm a former soldier' 'I'm a published writer') or simply in an attempt to embarass. However, in contrast to the Chinese cases discussed in the stories above, my impression is that in these cases, retreat from the forum signalled defeat, and the end of the investigative effort, nor were authorities involved, given the oft-anarchic (or at the very least irreverant) slant of some of the sites.

Here's one example that went a bit further here, the p-p-p-powerbook prank.

It's quite easy to find information online. That we probably all know. We're aware of state surveillance, and we're becoming fairly concerned about the data organisations like facebook, google or amazon might have about us, but there's this third strand where we might become the object of collective attention. It's synoptic but not quite in the way described in that article.

The most obvious political perspective that appears with regard to this is J.S Mill's understanding that society (as well as the state) can be sources of oppression. One of Mill's core contributions to political theory was that society can potentially be more oppressive because of it's willingness to judge and disapprove of individual conduct. The internet is interesting in that it can be potentially supportive of a lot of individuality, allowing people with relatively niche interests (or habits) to find others, establish communities etc, yet at the same time, has the potential to expose us to distributed peer-over-peer surveillance. Marc Andrejevic on lateral surveillance here. There's something here about the importance of compartmentalised identities (both online and offline) and the danger posed by easily linking those identities up online.

[thanks to Chris T for the p-p-p-pointer]
Posted by David Barnard-Wills at 14:47 No comments: 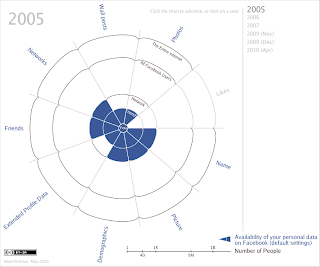 Two things of high interest to me and this blog, combined in one. Matt Mckeon has a visualisation of facebook's default privacy settings, the amount of people your data on facebook is likely visible too. The picture above is a capture of single frame of it - the full version found here animates and is interactive. Very nice work.
Posted by David Barnard-Wills at 12:40 No comments:

There's a discussion article in the New york Times about the failed bombing attempt in Time Square the other day. It rapidly turns into an assessment of the value of video surveillance in counter-terrorism.

Richard Clarke is surprisingly stoic, suggesting that we shouldn't panic, or assume that this means counter-terrorist efforts are failing. Steve Simon falls into the 'even if CCTV doesn't prevent this, we should still have more of it' trap and then goes on to use the UK as a positive example of how the United States should deploy CCTV. His argument is based upon post-event investigation. The 7/7 bombing investigation, although it is frequently visualised with the images of bombers getting on a train to London, was much more reliant on other, less visual investigative techniques. Evidence from the UK also suggests that the evidence value of CCTV is pretty small. Other research suggests that if many CCTV cameras were people, they'd be legally blind. Michale Black and Paul Eckman get this somewhat, although the former is pre-occupied with calibrating cameras so that they can spot people who are already on some list or database of potential suspects. Noah Shactman highlights the ease with which camera surveillance can be avoided (by a potential terrorist - it's still pointing at the vast majority of innocent people moving through the city, who perhaps shouldn't have to hide their faces).

The effect of video surveillance is often taken as almost axiomatic by security policy-makers. Kevin Haggerty recently called this the 'post-justificatory moment' in surveillance - where there doesn't have to be an explanation or justification for how and why a surveillance technology will effect a social problem - it is obvious that it will. In this case, obvious that video surveillance with help to counter-terrorism. There is something about the spectacle of the visual that makes video surveillance particualrly strong in this 'moment' (although the database is almost equally powerfully accepted - as Oscar H. Gandy's most recent book shows). Schneier points out that video footage of the bombing attempt "make for exciting television, but their value to law enforcement officers is limited."

Schneier highlights the importance of focusing efforts on investigation and effective post-event response, rather than on trying to identify specific targets - this was a problem that emerges in attempts to build in resilience. Firstly, a strong case had to be made that a specific site was a target for terrorists, and that this risk was high enough to merit the extra costs of building in counter-terrorism resilience. This case could rarely be made, firstly because of the low incidence of terrorism (it rarely happens, the chances of it happening to particular given place are extremely low, outside of some very high profile exceptions) and secondly because of speed with with 'targets' can change. The worrying response here would be to attempt to secure all locations (which at times seemed to be on the agenda).

Update - this bombing attempting has already been called 'The NY FAILbomb' in part because it was rubbish; a 'Rube Goldberg contraption' made of propane tanks and fireworks, made by somebody with 'more desire than ability'.
Posted by David Barnard-Wills at 10:58 No comments: