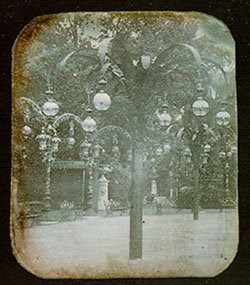 Thinking Allowed on radio 4 - audio stream available for the next week or so. Haven't managed to listen to it yet, but it looks interesting.

When gaslight first brought illumination to Britain's city streets people said night had been turned into day, but after the initial hyperbole had died down did it lead to a new type of social control? Laurie discusses the politics of gaslight with Chris Otter and Lynda Nead

Posted by David Barnard-Wills at 12:17 No comments:

A recent POSTnote briefing document from the Parliamentary Office of Science and Technology on E-Democracy, references the conference presentation version of the forthcoming British Politics Paper on surveillance, personal information, facebook and political parties.

Around the time I started working at Birmingham, I noticed that they one of the upcoming research briefs from POST was on e-democracy, and sent them a few suggestions of people to talk to, read up on, along with this paper, so it definitely seems worth it to get things out there, and seen by people.

In the interests of full disclosure, I did a short research fellowship at POST a few years back, so had an insight into how their research for POSTnotes is conducted. This was mine.
Posted by David Barnard-Wills at 13:45 No comments:

The following dropped into my inbox from about 5-6 different sources. I can't go because I'm teaching all day, which is a shame. I've attended two of the seminars in this series (presented at one on the Ethics of Resilience in counter-terrorism) and they were both pretty good. It's annoying that I can't make the one on surveillance.

ESRC Research Seminar Series: Ethics and the War on Terror: Politics,
Multiculturalism and Media.
Call for papers and participants.

This one-day seminar is the final event in the above seminar series,
which has adopted an interdisciplinary approach to ethical dimensions of
the war on terror. The seminar will focus on broad areas related to
intelligence and surveillance, including links between them. It will
include discussion of the three main themes of the series, politics,
multiculturalism and media, and a roundtable will offer conclusions on
the series and discuss future research agendas.

We would like to receive further paper proposals, including from PhD
students, on the seminar theme. Please email paper proposals (a title,
250-word abstract and your affiliation details), and requests to
participate in the seminar to Gillian Youngs (gy4@le.ac.uk) as soon as
possible and no later than Monday February 2 2009.

The seminar is open to policy-related and practitioner participants as
well as academics and research students. The number of places is limited
to 30. There is no charge for the seminar and lunch and refreshments are
provided. For those presenting papers standard rail travel and overnight
accommodation expenses where necessary will be covered.
ESRC research seminar series 'Ethics and the War on Terror: Politics,
Multiculturalism, and Media' coordinated by Gillian Youngs (University
of Leicester), Simon Caney (University of Oxford) and Heather Widdows
(University of Birmingham).

Good news yesterday evening, recieved an email from Laura Huey, one of the guest editors of the upcoming Surveillance and Society special issue on resistance to surveillance. The paper 'Individualism and Identity: Resistance to Speed Cameras in the UK' I wrote with Dr Helen Wells has been accepted for publication in the special issue (pending some revisions). Looking forward to seeing that one in print. It'll be good to get a full article in Surveillance and Society.

6 weeks to get the revisions done, shouldn't be a problem.
Posted by David Barnard-Wills at 09:21 No comments:

The paper that Stuart Reeves and I wrote on extracting personal information from relationships on social networking sites, and some of the political implications of this has been accepted for publication in the 'Beyond the mainstream' section of the journal British Politics. The aim of the section is to increase the scope of the study of british politics, which tends to focus primarily upon political parties and their doings, when it should probably be a much broader and more inclusive field. We've more than happy to contribute to that intention with a discussion of politics of surveillance and personal information.
We've got to do a couple of minor revisions, then it should hopefully be published in Volume 4, Issue 2 this year (maybe June, going by last years publication pattern). Stuart had his viva around the same time as I did, and has also recently submitted his corrections.
Posted by David Barnard-Wills at 13:29 1 comment:

On the 8th Jan 2009, I attended the third workshop in the ESRC funded Surveillance Studies Network seminar series 'The everyday life of surveillance' on 'Surveillance of non-human life' about which I inititally had some scepticism, but since attending have been totally convinced of the importance of examining this topic. It was an attempt to counter the general focus in surveillance studies of surveillance of human beings.
Andrew Donaldson (complete with blade-runner referencing T-shirt) gave a talk on root questions of animal agency, theories of animal agency and understanding animal behaviour, and the fundamental disconnect between developments in such theories (qualitative behavioural assessment) and new technologies such as DNA traceback.
Andrew felt that we actually overplay human agency (fairly biologically determinist?). He also spent some time talking about foodchain surveillance, which may have prompted some people to turn vegitarian. He used an interesting concept of 'Virtuous food' and showed how the supermarket industry was able to use surveillance of its food chain in the name of the invisible consumer to exert greater control over its supply chain. He questioned exactly for whom this surveillance of animal welfare was being conducted.  He presented two model.s that might lead to this situation, one 'conspiracy' and the other 'clusterf**k'. It occured to me that there were very definite class dynamics in foodchain surveillance, and that the differential labelling (and monitoring) enable market segmentation.
The second presentation, by Gareth Enticott on Social capital and surveillance of bovine TB examined how the concept of biosecurity was constructed in various ways in government, veterenary and farming discourses. It gave an account of individual vs population health promotion, and how anecdotes were used to question science or policy pronouncements. Prevention was particularly problematic because success is marked by a non-event (same for counter-terror). There was also an acount of lay epidiologies. The presentation concluded with research done on farms with inspections into bovine TB, highlighting the conflict caused by the privatisation of TB inspection -  vets acting as inspectors on their normal clients (who pay their wages) and the various ways in which official protocol is subverted or avoided when faced with practical reality, and how the process was subjected to regulatory capture by farmers.
Amber Marks, author of Headspace, which I think I've written about here before, gave a presentation, which included some powerpoint slides she'd 'borrowed' from various sources. These gave an amazing example of how technology is constructed as accurate ('there are no myths about technology' 'everybody knows how technology works'). This was in the context of a comparison between mechanical surveillance methods and the use of sniffer dogs.
Steve Hinchliffe gave a talk on an upcoming research project, for which he had been conducting preliminary pilot research. The project was about biosecurity borderlands: surveillance gone wild, and comprised of various strands, one of which is illegal meat markets in Birmingham. He spoke about the differing concepts of bio-security in various countries - the USA adopting a homeland security model based on bio-terror threats, expanding out to include non-intentional threats, the UK and EU reacting to foot and mouth, and Australia primarily focussed upon invasive species. His talk used a bio-political method to account for biosecurity. It was about regulation not prophylactics (modulations not curtailment), security not defence, geopolitics meeting biopolitics, and borderlands rather than boundaries, and the importance of preparedness and responsiveness.
The next seminar in the series is likely to be in April/May, I think in Edinburgh to co-ordinate with events organised by Mike Nellis on surveillance in Scotland, and will look at Surveillance and Regulation. I think Charles Raab is organising that one and it'll be right up my political science street.
Posted by David Barnard-Wills at 12:57 1 comment:

Its been a while since I posted here, and a fairly busy time too. Finished up the corrections on the thesis, had them off for proofreading, and then they were handed back to Dr David Stevens, my internal examiner at Nottingham (co-author of the rather good Inequality.com). Finished a draft of the Terrorism literature review for RE-DESIGN, and managed to fit in a holiday over Christmas.
Thesis - I had a number of things to do to the thesis to answer questions raised by the examiners. Chief among these was to provide a summary of science and technology studies, especially as this feeds into surveillance. I think this was missing because I started to engage with this field towards the end of the project, and even after submission (and it needed to go in the literature review chapter, which was one of the first written. I'm a member of EASST now, and have been since they offered a reduced rate for the conference in the netherlands. This involved reading some rather good stuff, including Simon Cole's Suspect Identities.
I also expanded the deleuzian element of the thesis, specifically the idea of the collective assemblage of enunciation, the discursive element that complements 'machinic' assemblages in Deleuze and Guattari's 'A Thousand Plateaus' but is missing in Haggerty and Ericson's use of assemblages in The Surveillant Assemblage. This theoretical point makes a good argument for the importance of using discourse analysis to look at the way that surveillant assemblages are constructed and held together through language and communication.
I dropped a number of policy proposals from the thesis. I still beleive in all of these, but it was pointed out in the viva that they didn't necessarily follow from the findings of the thesis, more from a general take on surveillance and information policy.
Anyway, thats back with the internal examiner, and we'll see if the changes are ok, and if so, i'll be recommended to the registry for the awarding of the PhD.
Posted by David Barnard-Wills at 12:49 No comments: