Surveillance in the news over the last year 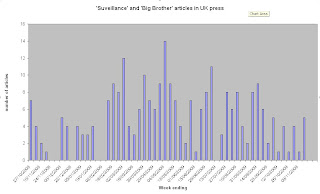 This is a very crude visualisation, but I've got a lexis nexis alert which gives me a summary each week of UK newspaper articles with 'surveillance' and 'big brother' in them (from a previous project) and I thought I might collate some of the data together. This one might be a bit too granular, but I'm thinking over overlaying it with some significant 'surveillance events' that got or caused the news coverage. The following image shows the same data, but aggregated by month. 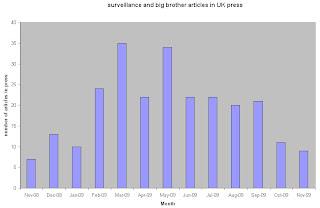 It's early days on this, not entirely sure if it actually tells us anything, apart from surveillance topics (using the trope of big brother) crop up pretty regularly in UK newspapers, and that there is some variation in this (there were only a couple of weeks in the year when there was nothing) and that there tend to be some big spikes which look like they're linked to specific newsworthy events. There' s a background level of editorial comment on the issue too.
Posted by David Barnard-Wills at 15:35