Review: The Revolution will be Digitised, by Heather Brooke

I've just finished reading 'The Revolution will be Digitised: Dispatches from the information war' by Heather Brooke, and thought it was worth writing a few thoughts about it. I'm very sympathetic to the position adopted in the book, and its not badly written at all, I'm just not sure I learnt anything from it. I'm not sure its a book for me.

I've previously read Brooke's The Silent State, and I learnt a lot from that. Including some often uncomfortable truths about the murky, deliberately obscuring parts of the British legal and political system. It benefited from being written by an author who engaged with those issues on a daily basis, but also had an outsider's perspective on how things could be different. It was also driven by a strong moral perspective on the rights of citizens to information about the activities of government.


I have two main problems with The Revolution will be Digitised. The first is that the personal and novelised narratives are at the centre of the structure. Whilst the book does engage with issues about authority, privacy these feel secondary to the narrative of the movements and activities of a bunch of crusading journalists, hackers and wikileakers. The absence of a real system of references or bibliography particular grates for an academic reader and contributes to this. For some readers, the human perspective on the characters involved in this drama, particular the insight on the character of Julian Assange might be the key point of interest, and there's certainly a lot of that here. There's a certain amount of self promotion that goes along with this type of narrative. The second problem is related, the book's substantive content feels light, and I think this is primarily a result of the time frame of the publication. The book focuses upon events between January and November 2010, being published in August 2011. I think this account would have benefited from waiting, and seeing what else happened with WikiLeaks, the Arab Spring, Anonymous, which receive token mention. Instead, I fear it was rushed to publication because of popular interest in WikiLeaks, the impending publication of accounts by WikiLeaks insiders and Julian Assange himself.

This isn't to completely discard the book. There's a decent perspective on the global nature of privacy-invasive technologies and practices, where countries can attempt to justify their practices through reference to each other's methods, leading to a dangerous race to the bottom. The core political thesis of the book, that there is a brewing 'Information War', between those who see the Internet as an opportunity to reform politics and build something new, and others who see it as a threat to their interests or a tool of social control, certainly has some weight, and is an important topic. The subtitle is very honest, these are dispatches, personal journalistic accounts of a broader political issue. I don't want to devalue a journalist being a journalist, especially one who is trying to maintain the professional standards and style of investigative journalism. There is certainly value in that, but the substantive topics are covered in more detail elsewhere.

There's a website for the book, with additional material including some of the source interviews at www.therevolutionwillbedigitised.com 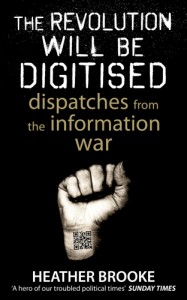 Posted by David Barnard-Wills at 16:44