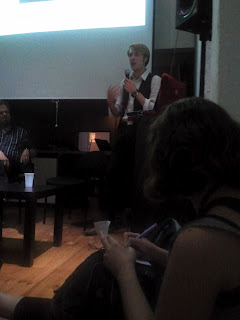 During the LISS-COST State of Surveillance conference in Barcelona (May 2012),  I was asked to give a short talk at one of the evening public events associated with the conference.

I spoke about the politics of resistance to surveillance, and I've just found the scribbled handwritten notes from the talk, so I'll transcribe them here, combined with what I think I was trying to argue. The photo was taken by Kevin Macnish. This was also the first time I'd been simultaneously translated.

"I'd like to talk about the politics of resistance to surveillance. I'll mainly draw upon examples from the UK, the country with potentiall the most CCTV per head, which has seen a government or two with enthusiasm for surveillance, a proposed ID card, and where surveillance has come to public attention. Surveillance had become a public political issue to the extent that it featured in opposition manifestos during the last general election, and cropped up in the coalition agreement. However, the UK's seen variable resistance to surveillance. There is sometimes opposition, public outcry,  surveillance programmes sometimes get cancelled. But at other times there's nothing, no interest. Sometimes there is even public enthusiasm, even if some of that is fairly manufactured.

So in this reading, using TOR to disguise your own internet traffic, or wearing a bandana at a protest in order to hide your face, then I don't really want to call this political resistance.

My main argument is that, apart from specific privacy activists,  resistance is not often thought of as 'resisting surveillance' as we might think of it analytically within surveillance studies. Rather, it's more often part of a wider politics. This can be a liberal politics, for example a human rights discourse, but (at least in the UK) significant resistance to surveillance is driven by other things, including economics, identity and personal situations.

Some implications, or if you were in an Leninist/Bolshevik mood, and wanted to promote resistance to surveillance, then I think you'd need to make links with existing political struggles, and look for the presence of surveillance in other politics. There are a couple of problems with this. We can see that often the perceptions of what particular surveillance technologies are 'for' more important than the actual function of those technologies. Additionally, it also suggests that the activity of academic or journalistic 'revelation' in which a previously hidden surveillance practice is identified as such, doesn't often produce resistance (in itself). It's not surveillance targeted at the audience, its not effecting them. Experience of surveillance is probably a critical matter in resistance.

Secondly, surveillance effects are not evenly distributed, and even if we do live in a surveillance society then this tends to impact us along existing social striations. Unfortunately, this tends to mean that those impacted often lack the social capital and resources to effectively challenge surveillance practices (in a political sense). Sometimes resistance to surveillance emerges when that surveillance threatens to remove or challenge a social privilege (see the article in Surveillance and society on speed camera). This might be a problem for certain types of radical politics.

This whole picture might prompt a politics of coalition, where you would attempt to make the connections between different politics issues each (or all) having a surveillant dimension."
Posted by David Barnard-Wills at 08:00