It's snowing outside, it's nearly December, and the Christmas lights have been up for weeks. Alongside this seasonal joviality, I've been noticing some odd trends in toys and games recently. They're showing signs of reflecting our cultural obsession with all things surveillance. Let's see what we're putting on Big Santa's christmas list this year (remember kids, he knows if you've been naughty or nice). 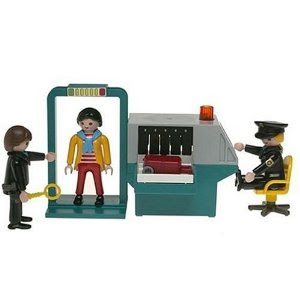 Almost a classic, being available for a couple of years now. Your children can exerience the fun of being a (minimum wage) airport security worker. Coming next year, the playmobile nudotron scanner and enhanced pat-down kit, which a lot of people are already exited about. 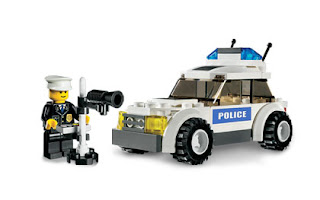 Lego have had police for a long time, but it's good to see them keeping up to date with modern surveillance technology. This patrol officer has a handy speed camera! Thinking about resistance to this? Motorists Against Detection playset sold seperately. Unfortunately the police helicopter is being phased out and replaced with an unmanned drone, boo! 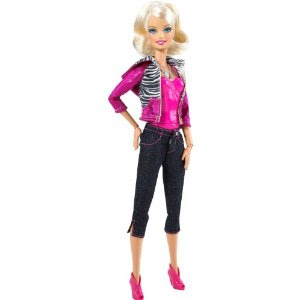 Barbie updates her traditional christmas role of reinforcing gender stereotypes and creating body-image problems with this new variant, incorporating a web cam in her...decolletage. Probably not the sort of empowering exhibitionism written about here.

Spy Gear Lie Detector Kit - "Whether you're working for the police or the government you can now use this fantastic lie detector test to find out whether your suspect is guilty! A perfect toy for the budding police officer; it also encourages imaginative play and creative thinking. Find out who's telling the truth and who's not by giving your suspect a lie detector test. Attach the sensor to your suspect's finger. Ask tough questions to really make'em squirm. The indicator lights light up when your suspect isn't telling the truth-busted. Batteries required: 2 x AA (not included). For ages 6 years and over."

The best thing about this toy? It doesn't matter if it actually works or not, just like the real thing!

So that's presents for Michael, Helen, Hille and Andy sorted. But on a more serious note, I'm not sure how I feel about these. Intuitively, it feels weird to give kids something that encourages them to play-act being security agents, or to put their friends through an interrogation (and the barbie-thing is just a bit mental). On the other hands, these things are part of our contemporary culture and I'm sure kids will want to engage with that. These toys may also be labratories for subversion and resistance, and who knows what use might be made of them in creative and imaginative play.


We might also think about toys and games that might help young people to make sense of their current environment in playful ways. There's some stuff out there already, for example The Curfew game from Channel 4. But what would 'my first encryption set' look like?


I don't know, why can't kids have an old fashioned toys? Like a telescope for example.
Posted by David Barnard-Wills at 11:53