Recently, I've had a couple of invitations to go and talk to people about the Privacy card game, and then play it with them, which has been great. Firstly, I had an invite from Rosamunde Van Brakel to the Vrijie Universiteit Brussel to play the game with a surveillance studies reading group there on a snowy Monday. These photos are all taken in the calm bit during the session when people have (sort of) got the rules of the game, and I can just stand around not doing much. 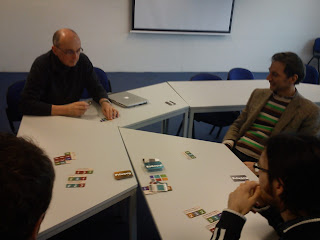 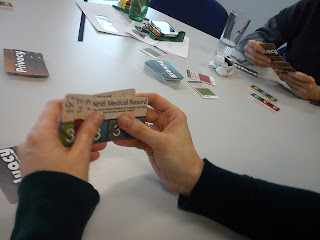 Secondly, Professor James Harding, at the University of Warwick, gave me the chance to talk to his undergraduate Performance Studies class on Theatres of Intelligence, Espionage and Surveillance. I gave a talk about a political theory approach to surveillance, and the importance of the politics of the representation of surveillance, and then introduced the Privacy card game. They seemed to take to it pretty well, and this class saw some pretty devious and cut-throat play at times. This session was also pretty good for exploring some of the classroom potential of the game. 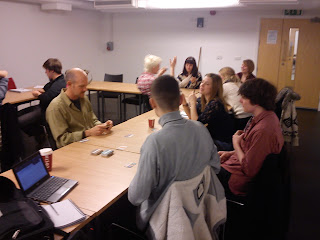 I've really been enjoying these events. Now that the play-test phase of the game is over, and the project has pretty much concluded, they're as much about sharing the project, and storing up thoughts for what direction to take this work in next. More good news about this project is that a paper based on the research has been accepted for publication in Political Studies, some point during 2013.
Posted by David Barnard-Wills at 10:45