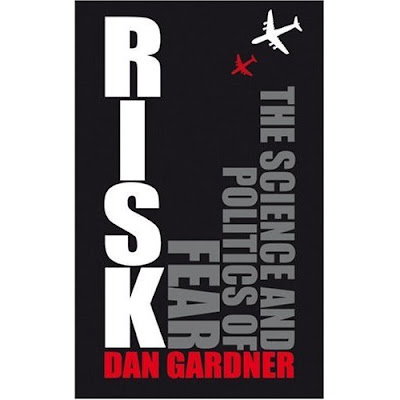 I've just finished reading Risk: The Science and Politics of Fear by journalist Dan Gardner
Its a good read, and seems to have got a lot of favourable press attention. Gardner attempts to show how a feedback loop exists between our evolutionary psychology, contemporary information technology, and political (and economic) actors with an incentive to promote fear.

Gardner's perspective here is informed by the idea that each of us has two systems of thought, 'head' and 'gut'. Head is rational, can make use of statistical evidence, reason and analyse. Gut on the other hand is a product of our evolution, and responds to things in an emotional, rapid, unanalytical way. The two systems of thought are in competition, and head is not always capable of over-riding gut. I'm generally not a fan of evolutionary psychology as an approach, especially the type of pop culture 'men are from mars, women from venus' ideas that suggests that we are all trapped with fixed behaviour patterns that are in no way the result of cultural conditioning. At least Gardner deals with the interplay between the two systems. Additionally, you don't need to posit an evolutionary origin for psychological tendencies such as the confirmation bias and the availability heuristic, to show that the exist and that they affect our thinking on risk - which gardner does by drawing on the large literature of experimental psychology. The evolutionary psychology element does serve as a way of drawing in a lay reader however.

He has a section on perceptions of risk from crime and terrorism which are worth reading for people interested in these fields. If you've ever delved into the academic risk literature there there won't be an amazing amount of new material in this book, but if you haven't, this is a good place to start, or to get a very readable overview. No double I'll be drawing on some of this material, especially considering recent interviews I've been doing.