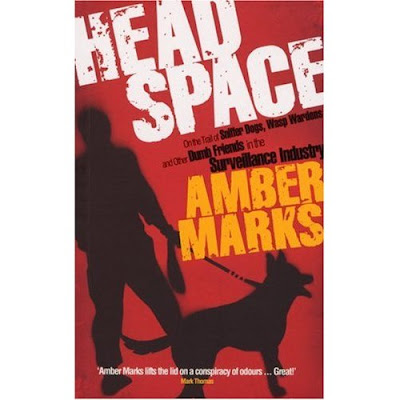 There are a number of articles in the 'popular' press today that talk about about the use of sniffer dogs in the Madeline McCann investigation about how they might just have detected old blood rather than anything to do with the particular investigation, or even that they were 'rigged'

As with this whole issue, the articles are full of jingoism - british police good, foreign police bumbling and emotive language, there's also an odd double movement, in which the police are criticised for 'jumping on' the findings of the dog - but the use of the dog (by a former police dog handler) is not questioned.

If the dog detects 'very old blood' then what use is it for a criminal investigation if anything is tagged up as a false positive.

The reason I'm mentioning this, is that I've just finished reading 'Headspace' by Amber Marks, which looks into oflactory surveillance using animal 'bio-intelligence' where she investigates a number of issues around this. It's somewhat anecdotal, and I feel like I know as much about Amber's life (see, we're on first name terms) as I do about olfactory surveillance, but its an interesting look into the world of police sniffer dogs and the like. It really needs a conclusion chapter though. There's lots of interesting material in there that I'm going to go back through as it fits in with some of the issues I'm thinking about in terms of challenging statements made by surveillance systems. The problem is, having read through the (very accessible) book, I'll have to do so again to find the useful bits, and seperate them from the narrative.

Posted by David Barnard-Wills at 20:16