you have nowhere to hide 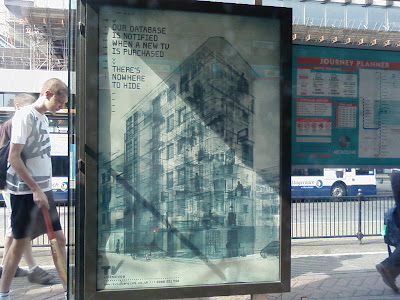 Found this photo on the computer and thought I'd share. It was taken in manchester, and it looks like the summer, so I'm guessing summer '07. It features a poster on a metro station 'advertising' the TV licensing agency's ability to reduce the privacy of the home to a state of utter transparency, akin to the housing in Zamyatin's We, through the use of their database - which is 'notified whenever a new TV is purchased', with the result that 'there is nowhere to hide'.

Nice. Anyway, these folks have been pretty good at bringing out the surveillant, dystopian imagery and some funky surveillance posters. They were responsible for the stark black and white '3 people on this street do not have a TV license' posters of a while back.

But basically, they're hunting for non-normal activity in a big database. So, they don't really have x-ray vision (and there never, ever were TV detector vans) but instead operate on the heuristic that EVERYBODY owns a TV right? and if somebody hasn't paid for a license, then they must be cheating. Having not had a TV for a couple of years, I know this is abnormal behaviour,in a statistical sense, but also, sometimes seemingly abnormal in a moral sense. There's something weird about you if you don't... Having informed the agency that I didn't have a TV, they sent a man around to look around my house to see if he could find an illicit TV.

I wonder how this presumption will work with more and more people watching TV online, either through the fantastic iplayer, or illegally through various other mechanisms. The BBC has acknowledged that it will need to rethink its license fee models, but my worry is that they'll be tempted to go down the route of placing some spyware on your computer to search for televisual deviancy.

but still, I bet somebody in the advertising department had a lovely time coming up with this poster.